With the help of many people, I have collected over 100 articles/papers/research documents - Woo! I am currently triaging these and putting them into categories, vetoing the ones that aren’t relevant.

Tony McGregor has sent me the number of students and grades for male and female students from 2003 to 2015.

This data is pulled from the database that tracks enrolments. The student declares their gender upon enrolment.I am unsure what UoW’s plans are to be more inclusive of transgender and genderqueer people.

Looking at this data, I am asking myself “How do I want to organise the data? Do I want to have a trend of number of students over the years? Do I even want to incorporate grades?”

My plan is to take the numbers of students (data from the right-side graphs) and look at the trend of numbers of students over the years. Currently I am unsure how relevant the grade distribution is, I will probably include it in my report for interests sake and to clarify that there is no significant difference between men and women academically in this subject. This could dispel myths that women drop out of computer science because they find it too difficult.

The data is broken up into separate CSV files. I am thinking of writing a little python script to aggregate the data for me, but I am not sure if I should do that now, or later when I have done more reading? I am concerned that knowing the trends might bias my view of the research I read, on the other hand, it could help me to identify research that has been conducted in environments that reflect the same trends.

Advice please: should aggregate the data and look at trends now or later? At this stage I think I am going to do it later.

I had meeting with people from Melbourne University to talk about my research and to exchange some ideas on how to tackle the gender disparity in computer science. It was wonderful to talk to them and it was insightful to discussing challenges that come with being a bigger university. Here are some of the highlights:

Here are some excerpts from Why are There so Few Female Computer Scientists? By Ellen Spertus (1991)

I found this quote interesting because the issue of gender bias starts very early in life: 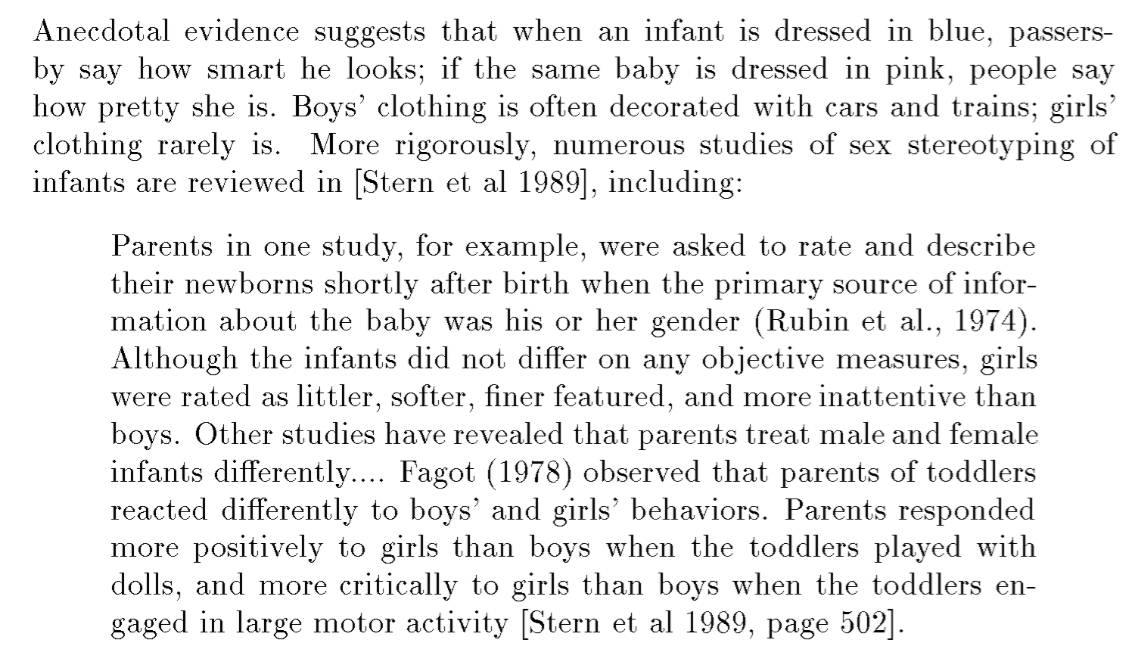 I found this quote valuable because it is very direct about some of the problems when finding solutions. I don’t know that I like this quote but I think it’s something that I need to consider. It encourages me to be realistic and to resist getting caught up in idealism:

I watched this talk that is given by the president of Harvey Mudd College, Maria Klawe, in 2013. (Harvey Mudd has a gender distribution: 54 percent male, 46 percent female in computer science.) The second half of the talk focuses on the specific things that they have changed to become more welcoming to underrepresented groups.

Here are some of the ideas I liked:

Maria gave an example of a time when she was the ‘Presidential Imposter’ Her slide had this information on it: I feel like an imposter when I…. “do something successful people do and women don’t often do” I have felt like an imposter when…. “I have supportive academic parents. They didn’t have a lot of money so I felt uncomfortable in a taxi or a hotel when I had to start doing these things as part of my career” Tips for success/ how you cope with it “once you’ve been in a taxi a thousand times, it isn’t scary anymore” “Don’t let [imposter syndrome] stop you from moving forward, it will still be there, but don’t let it stop you. I like to remember when I was scared taking taxi’s.” This event is about surfacing this idea that people have self doubt. 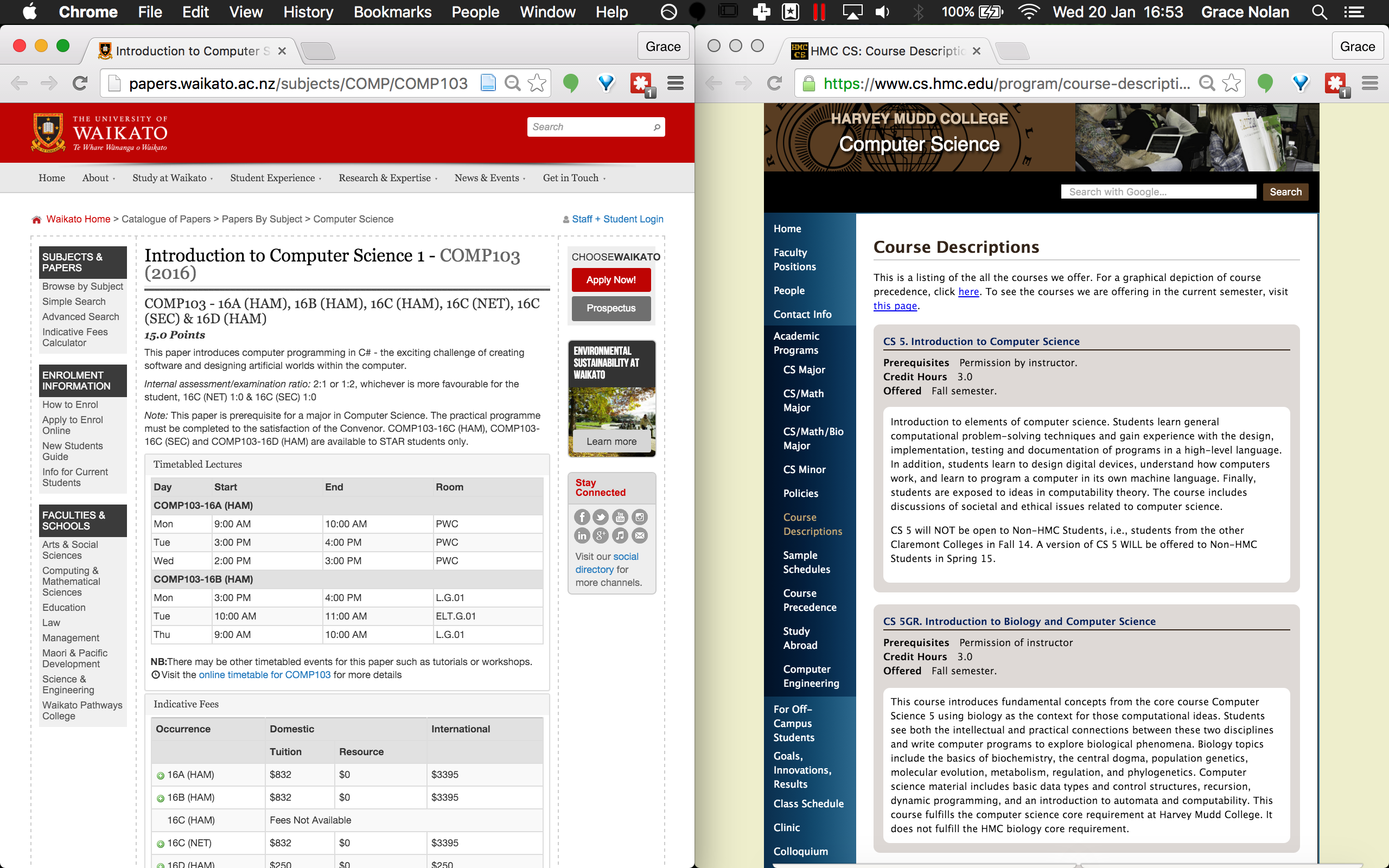 Maria said that they have been making efforts to reduce student “macho” behaviour, and that one of the “very effective” ways in which they have been doing this is by having a one-on-one discussion with the students that take up too much air time in class.

“The instructor have a private conversation with students like this outside of the classroom ‘I love having you in my class, it’s wonderful to have someone with so much passion and background and interest - and you know so much, you’re well prepared for this course. I’m sure you don’t understand that a lot of the other students in this course find it intimidating when you talk about these things - so if we can just have these conversations private, just the two of us”

I wish that people did this at my university! For me personally, I was greatly affected by this kind of student behaviour in my classes.

One of the problems with Harvey Mudd College and other American Universities, is that they have restrictions on the students they admit - they can simply allow 50 - 50 males - females into their computer science courses (they admit about 200 students each year).

Another factor is that their first year of university is about the equivalent of our final year of high school - this means there are certain papers that every first year student must take - including a computer science course. A fair amount of effort has been put in by Harvey Mudd College to make the computer science introductory course fun - so this means that students often continue taking computer science after having exposure to it. The enrolment and course structure is very different at UoW.

I was sent a really good paper on how to do good literature reviews. I am reading through this as a guide to plan my research. Here are some of the notes I have made while reading this:

= Technology I am using =

Since I am looking through a lot of research, it is helpful to me if I can organise the papers I am reading. I am reluctant to print everything out and use piles and post-its. I was recommend to use Greenstone, software that is developed at my university for the purpose of building digital libraries. I struggled to get this working on my mac, so I tried using it in my windows virtual machine. It wasn’t obvious how the software should be used and it seemed like I had to manually enter in the meta data for my documents. This is a process that would take up a lot of my precious, limited time.

After having a Google, I am now using Zotero to categorise my data. Zotero seems very easy to use and works in a way that I expect. It uses Google Scholar to look up metadata for research documents and it indexes the content inside the document, making it easy to search.

Where am I looking for research?

What kind of research am I looking for?

Possible problems with my research project

I am of English and Irish heritage and I grew up Hamilton New Zealand. I am studying a male-dominated and male-appraised field. I am independent, strong willed and uncompromising; I am not used to cultures where women are expected to take care of the home. My current ideas on the subject are shaped by my own experience and that of what I have read and discussed with people in the same position as me. I read Unlocking the Clubhouse by Jane Margolis and Allan Fisher early on when I was investigating why I felt uncomfortable in computer science, thus I am quite influenced by this research.

There are some things that has been lurking on my mind and has been a concern of mine for a while. These include:

I hope you enjoyed this update!

I would also like to make an amendment to my last update - I actually do have the trending data over the years. This is what it looks like.

This is the whole university: 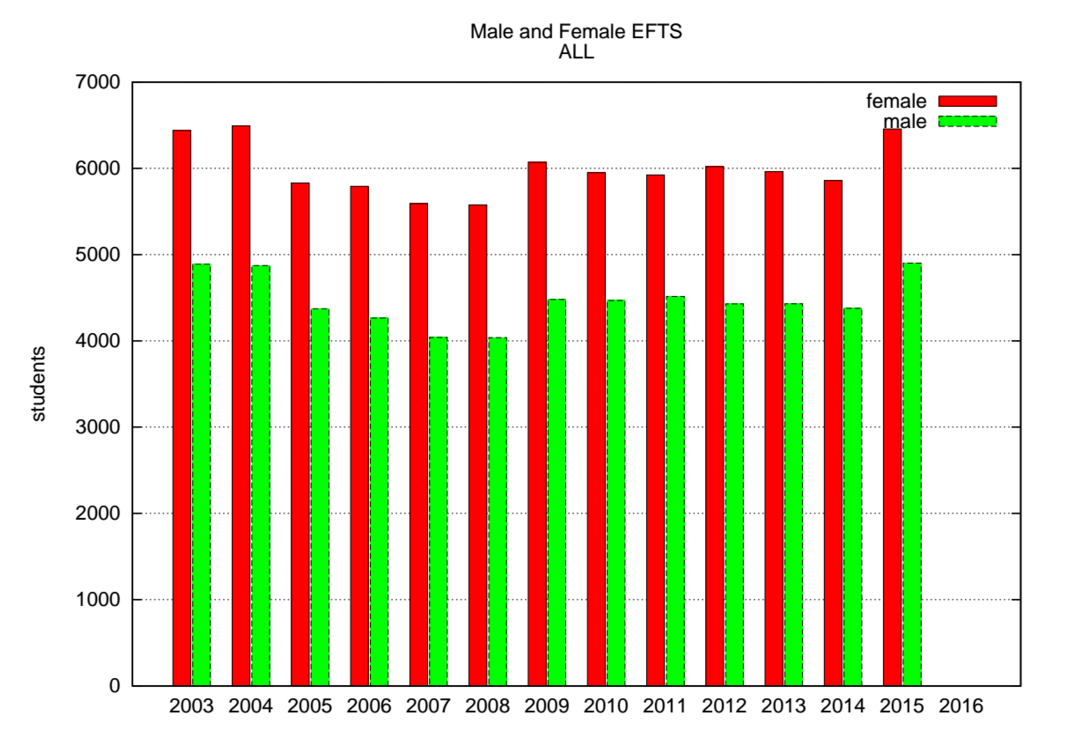 It is interesting for me to see that there have been more female than male enrolments university-wide for a significant amount of time and that there seems to be little variation in this gap.

This is computer science: 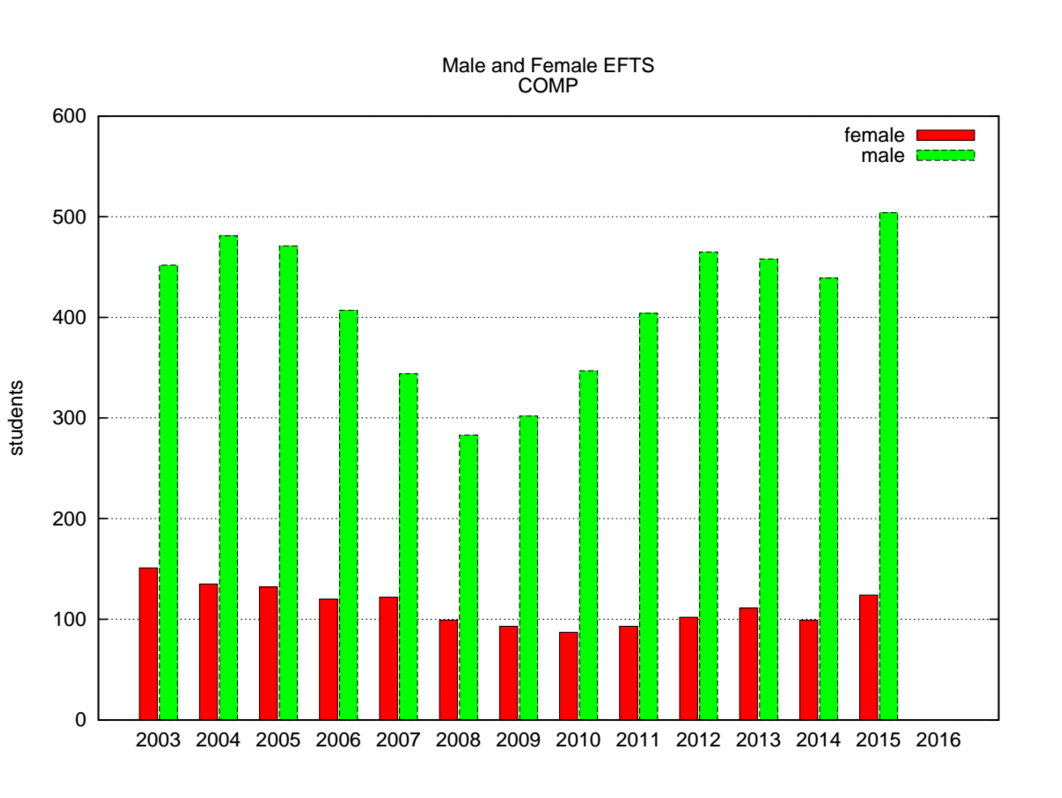 I wonder what happened in the years 2005 - 2008 to cause that dip in the number of students enrolled in computer science (and, less dramatically it seems, university-wide). Also, the proportion of women in cs was best in 2003 and UoW hasn’t been doing as well in that regard since then.